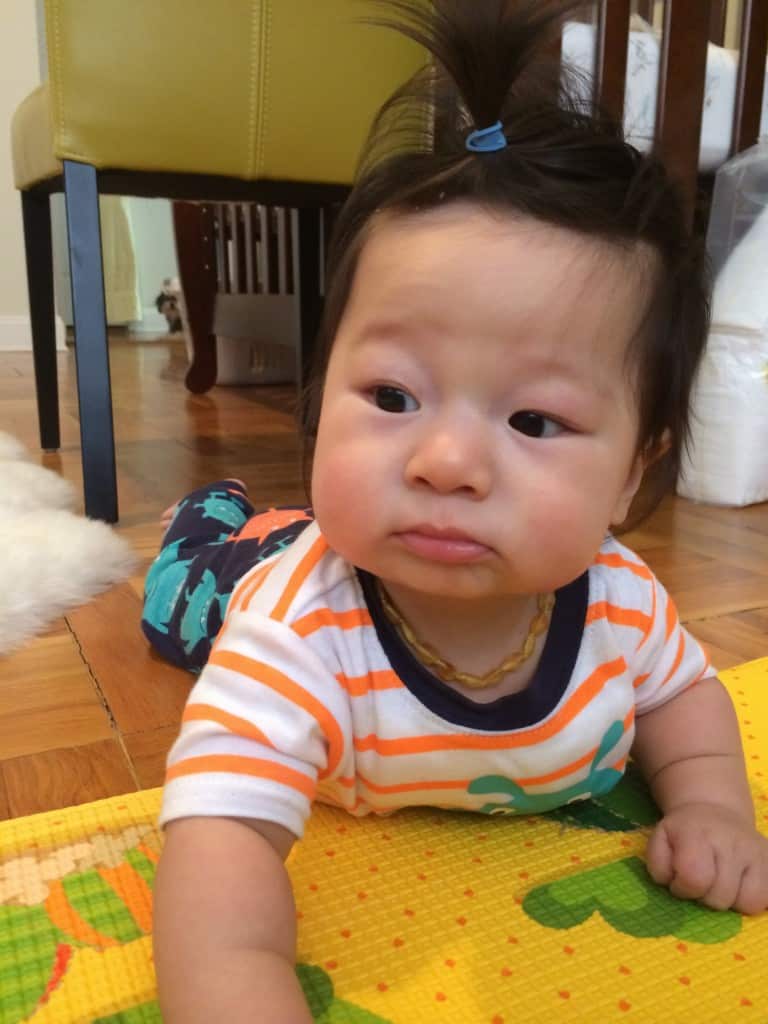 Max has been wearing an amber teething necklace since he was about three months old. I purchased it when he began to drool excessively, which is one of the first signs of teething.

The number one question I get from people is: Does he or is he supposed to chew on it? The answer is: No.

Amber is a natural resin that, when worn against the skin, releases natural oils which contain succinic acid. Succinic acid is reported to have analgesic properties that can help alleviate teething symptoms and pain. Now, not all amber is created equal, with Baltic amber containing the highest concentration of succinic acid.

So I will be the first to say, there isn’t actually any scientific evidence that amber helps with teething. None. I don’t know if wearing amber for teething is completely bogus (which it may very well be) but based on the amount of anecdotal evidence in favor of it, I figured, it couldn’t hurt to try. Therefore, all of my information is based solely on anecdotes and nothing truly scientific.

I purchased Max’s necklace from Amber Artisans. They shipped the necklace directly from Lithuania, where Baltic amber is sourced. Ok, full disclosure: When Mr. C first saw the necklace he tossed it across the table and said, “What is this junk.” Amber is very light and so it can seem plasticky and cheap. But you can bet Mr. C has since changed his mind!

The necklaces from Amber Artisans are safety knotted which means each individual bead is knotted and also have safety clasps, i.e., if enough pressure is applied, the necklace will break (in order to prevent choking and strangulation).

And, supposedly, when choosing an amber necklace, beads that are “raw” or “unpolished,” lemon/popcorn in color and have a larger flat surface, are more effective. Again, I don’t actually know if that’s true. 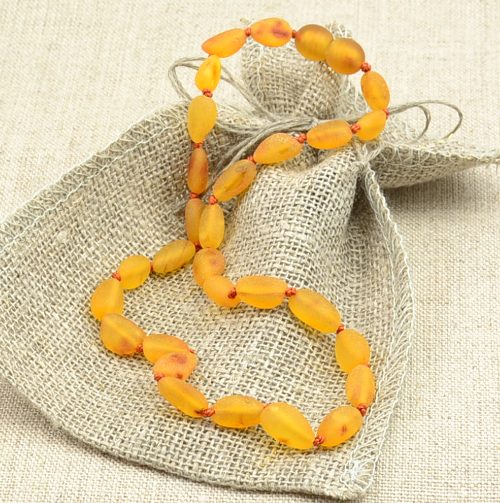 The necklace I got for Max: honey-colored, unpolished, and flat beads.

The only time I take Max’s necklace off is when he is taking a bath. Otherwise, he wears it 24/7. Every once in awhile, he has discovered that he is wearing the necklace and tries to chomp or suck on it. I just take the necklace out of his mouth and he quickly forgets about it again.

So here’s the thing: Does it work? I can’t say for sure.

I have heard horror stories about teething and I just haven’t experienced it.

Now… I have no idea if I just happen to be very, very lucky, or it’s actually because of the amber teething necklace. However, I will also never find out because I’m not taking off the necklace until Max stops teething!

And, in the end, even if it doesn’t work, it sure does make a cute accessory.

UPDATE 09/10/16: Two years later, I am officially a believer. One of the first things I bought for Alexa was an amber teething necklace. She has since popped eight teeth without complaint and drools even less than Max did.

I have also gifted these necklaces to a few mommy friends who complained that their babies were excessively drooling. They now swear by it too!

Did you like my review? If so, you can buy a teething necklace from Amber Artisans here.

And if you liked what you read, please don’t forget to comment below, subscribe, and spread the love by sharing!